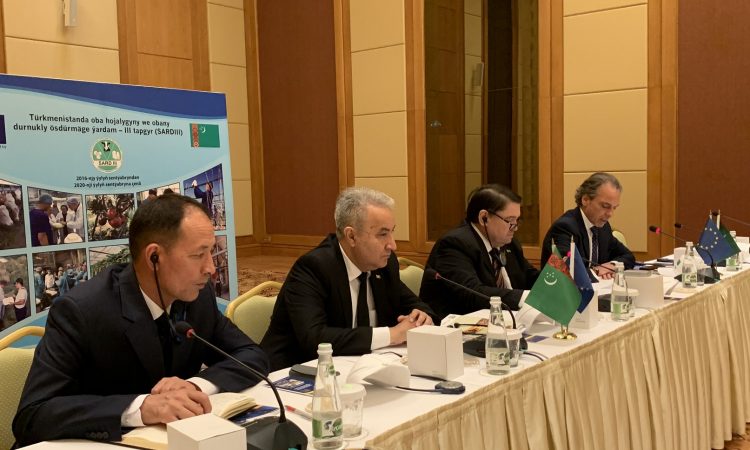 Team Leader of the SARD III Project in Turkmenistan Mr. Arthur Russell highlighted that the Steering Committee was created in the framework of the European Union funded project “Support to Further Sustainable Agriculture and Rural Development in Turkmenistan – SARD III”. “Its members include public institutions and SARD III representatives that work on the development of sustainable agriculture, rural development, and institutional support to the rural agro sector. The steering committee is an important tool for coordination between relevant stakeholders and the project team”, – said Mr. Russell.

In addition, the presentations were delivered by the SARD III specialists, who spoke about the current state and future plans of the SARD III project and its activities in Turkmenistan, including ongoing technical assistance to dairy, horticultural sectors, pieces of training and manuals developed for Turkmen experts and specialists on the best agricultural irrigation practices and methodologies, support to export promotion activities for Turkmen enterprises, support to local auditors and consultants. The participants of the Steering Committee highlighted the importance of the SARD III Project, gave their high rating to the actions taken by the project, and discussed the plans. The attendees have highly appreciated the project performance with Arthur Russell, Team Leader of the SARD III Project, sharing his very positive impressions of the project thus far. SARD III Steering Committee members discussed the next steps for implementing the SARD III activities and agreed on action points to be taken up by the SARD III Steering Committee members and all other stakeholders involved.