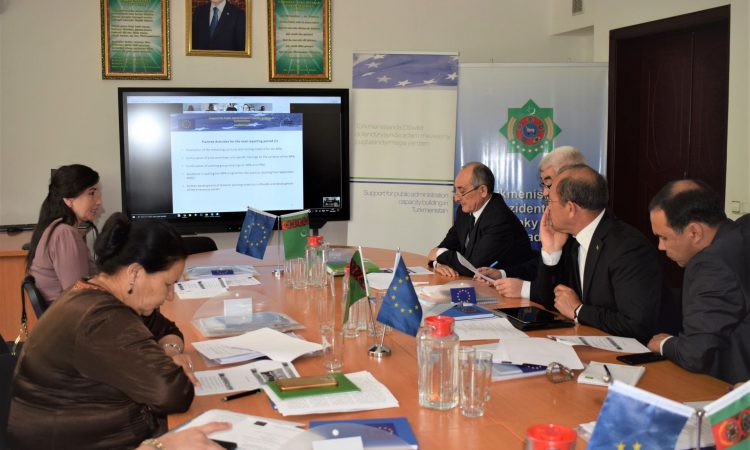 The sixth meeting of the Project Steering Committee (SCM) was conducted in the meeting hall of the Academy of Civil Service under the President of Turkmenistan (AoCS). The meeting was organized by the European Union (EU) funded project “Support for Public Administration Capacity Building in Turkmenistan” to discuss the achieved results for the reporting periods from 01 May 2019 to 31 October 2019 and 01 November 2019 to 30 April 2020. The SCM was held as an online meeting due to the current COVID 19 crises.

The chairman of the Project Steering Committee Mr. Alym Annamyradov opened the meeting. He highlighted the achievements of the AoCS with the support of the project and informed that the AoCS presented a proposal on implementation of the Master’s Degree Program in Public Administration to the Esteemed President of Turkmenistan.

Mr. Diego Ruiz Alonso spoke about the mission of the EU Delegation to Central Asia and the EU bilateral cooperation with Turkmenistan. He mentioned that one of the priorities of the European Union development cooperation with Turkmenistan is to provide support to the reform agenda of the country and emphasized the importance of human capital development and modernization of public administration.  In this regard, Mr. Diego Ruiz Alonso presented in brief the EU funded project efforts applied to meet the above needs.

Ms. Ivelina Dilovska welcomed the participants on behalf of Hulla & Co. Human Dynamics Gmbh KG and assured continuation of provision of a high world standard quality support to the beneficiary through the project.  Ms. Dilovska announced that the EU Delegation approved the project extension for eight months.

The meeting continued with the presentation of the Project Sixth and Seventh Interim Report and further activities. Mr. Folkert Milch presented the major achievements during the reporting period and spoke about regular meetings of the working group on the development of the MPA Program. He highlighted the importance of workshops on the development of the MPA Program modules for the AoCS and spoke about the results of the work on the development of the MPA Program. Mr. Milch also emphasized the cooperation with international partners/enhanced institutional capacities and implementation of training of trainers courses for AoCS staff and representatives of other partner institutions. The project team leader presented to participants also the planned activities for the next reporting period.

Mr. Johannes Stenbaek Madsen expressed his gratitude to the project and he said that he appreciates the efforts of the project team and achievements of the last year. He pointed out two very valuable achievements. One of them is the good regional cooperation between Turkmenistan and Kazakhstan as both countries could benefit from the available knowledge from each other and second, the good direction of the project towards the digitalization of the training and education process, which is very important now than ever. The meeting continued with discussions and proposals for the next reporting period. The Sixth SCM was concluded with the approval of the presented interim reports as well as with the preliminary approval of the next meeting of the Project Steering Committee