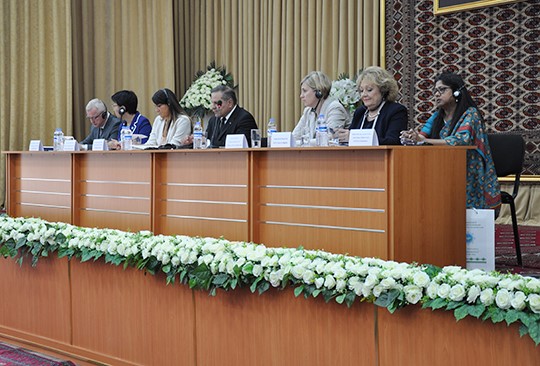 On September 12, 2018, representatives of the EU Delegation to the Republic of Kazakhstan, Ms. Silvia Pietropaolo, and Mr. Michel Van Hecke, Mr. Folkert Milch, Team Leader, and Mr. Eduard Zakharchenko, Key Expert of the EU funded project “Support for Public Administration Capacity Building in Turkmenistan” took part in a scientific and practical conference, dedicated to the 10th anniversary of the establishment of the Academy of Civil Service under the President of Turkmenistan (the Academy).
The Conference was attended by the high level government officials, representatives of public organizations, scientists and faculty members of higher educational institutions, listeners of the Academy of Civil Service under the President of Turkmenistan, representatives of international organizations, accredited in Turkmenistan and mass media, as well as by the Rectors of the Civil Service Academies of Kazakhstan and Belarus.
The results of the work of the Academy during 10 years, aimed at the improvement and strengthening the system of governance in the country, were presented and discussed. A significant attention was given to the importance of the international cooperation of the Academy within the framework of EU project.
In her welcoming speech, Ms. Silvia Pietropaolo, Programme Manager for Turkmenistan of the EU Delegation to the Republic of Kazakhstan, presented the European experience in the field of public administration, which is based on the development of the professional capacities and skills of civil servants and noted that within the framework of the joint project of EU and the Academy of Civil Service under the President of Turkmenistan , it is planned to enhance the institutional and training capacities of the Academy and of relevant state bodies through the development of modern training programs.
Mr. Folkert Milch, Team Leader of the EU funded project, congratulated the Academy with its 10th anniversary and expressed his strong beliefs for future cooperation in the realization and implementation of the project activities, aimed for modernization, in line with international and European standards, the know-how and skills of civil servants by building up the capacity of the institutions, responsible for the training and professional development of civil servants. In his speech, he underlined that one of the main goals of the project is to support the Academy in developing and establishing the Master’s Program in public administration through introducing new innovative teaching methods and techniques, developing relevant curricular and using international expertise and the opportunity to learn from other countries’ best practices.