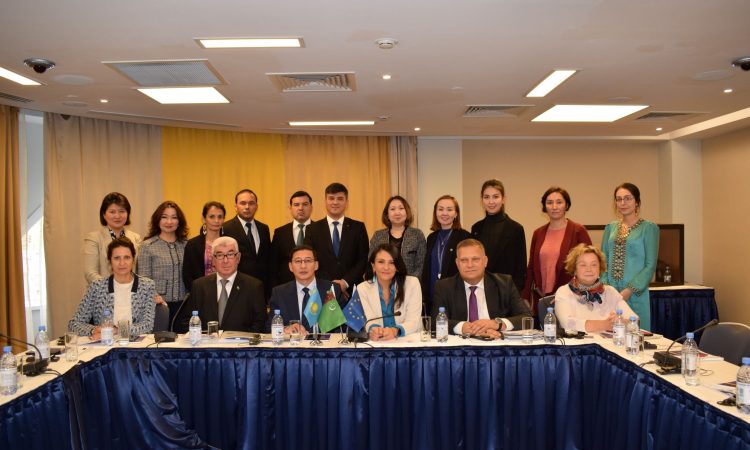 From 29 September – 1 October 2019 Kazakhstan hosted the third round of the working visit of Turkmen delegation to learn about Master of Public Administration (MPA) program development from experience of Central Asian countries. The visit was organized within the framework of the European Union funded project “Support for public administration capacity building in Turkmenistan” in cooperation with the Academy of Public Administration under the President of the Republic of Kazakhstan, Academy of Civil Service under the President of Turkmenistan and other stakeholders.

The aim of the visit was to present some of the final draft modules of the future Master’s Degree program to the Delegation of the European Union to the Republic of Kazakhstan, which is in charge of the portfolio of EU-funded projects in Turkmenistan.

The presentation event was held on 1 October 2019 with the participation of Ms. Silvia Pietropaolo, Program Manager for Turkmenistan and Regional Programs and Ms. Elena Levchenko, Project Manager of the Operations Section, EU Delegation to Kazakhstan. Rector of the Academy of Public Administration under the President of the Republic of Kazakhstan Mr. Yerlan Abil, project experts and representatives of the Academy of Civil Service under the President of Turkmenistan and International University for the Humanities and Development also attended the event.

During the event, the modules on Economic Law, HRM, Administrative Law, Macroeconomic theory and policy and Public Finance were presented by Mr. Vekil Vekilov, Mr. Babahan Berdiyev, Mr. Yazmyrat Kulayev, Ms. Shirinjemal Nursahadova, and Mr. Pena Poladov. Participants of the event shared their positive impressions and opinions on the presentations and on the MPA program in general.

On the same day, the study tour participants visited the Academy of Public Administration of Kazakhstan, where they attended the lectures and learned about the future Assessment Center of the Kazakh Academy.   The visit was concluded with a final meeting with representatives of the EU Delegation to Kazakhstan and Academy of Public Administration of Kazakhstan, during which the future steps in development and implementation of MPA for the Academy of Civil Service under the President of Turkmenistan was discussed. In this regard, Mr. Yerlan Abil expressed the hope to continue the collaborative work and assured that the Academy is always ready to provide its support in all project activities aimed at building of capacity of the Turkmen counterparts.