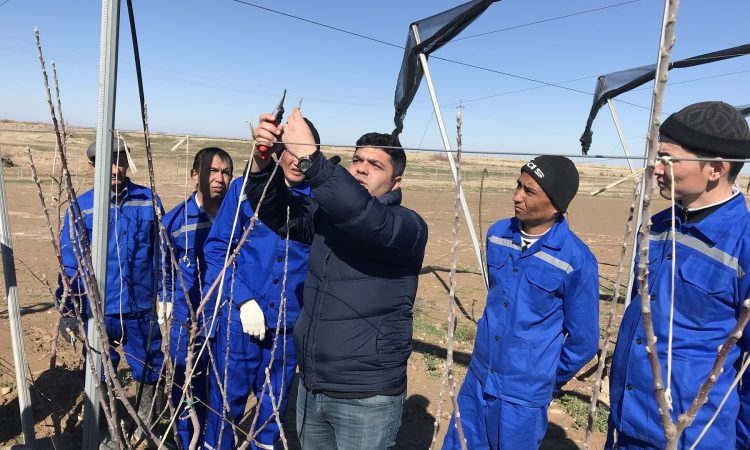 In a newly established apple orchard, SARD III Project short-term international engineer agronomist Mr. Mustafa Alkan cuts off extra branches from the apple trees planted three years ago. He is mentoring a group of Yunus Dayhan field specialists and explains why and at which points the branches of a tree should be pruned to encourage strong and more robust branch to grow for a proper shape of an apple tree and for a better yield. The farmer and field workers listen to Mustafa and watch the process carefully.

Mr. Yunus Abdullayev is the owner of the farm and one of the participants of the training today. His enterprise was one of the first enterprises in the country to express interest in close cooperation with the SARD III Project and in the current training. The field training sessions have equipped Mr Abdullayev with the knowledge and skills to understand and implement new apple farming and cultivation techniques and to increase productivity and productive lifespan of the apple tree varieties new to the country. He has also learnt about preventative measures required for pest control he can take to protect his orchard.

During the visit of Mr Alkan to Turkmenistan SARD III has also organized visits to “Altyn Gul” enterprise in Seydi town in Danew county of Lebap welayat, as well as to horticulture enterprises in Kaka and Baherden counties of Ahal welayat, where Mr Alkan worked with the farmers on addressing the issues specifically related to correct pruning of dwarf and semi-dwarf varieties of apples to increase productive lifespan of the trees, development of fertiliser application and pest control programmes, as well as preparation of the fruit trees for the new growing season.

The European Union funded Project “Support to Further Sustainable Agriculture and Rural Development in Turkmenistan – SARD III”, organized the Apple Farming and Cultivation Training as part of continued technical support provided under the Project’s Pillar A to local fruit producers. The first three inputs of the international expert on apple production provided by the SARD III project during 2018 have significantly assisted a number of selected pilot apple producers in the Lebap and Ahal provinces. Although it has only been less than a year since SARD III started working in the provinces on apple production, its activities are already influencing people’s thinking. “Local apple producers have begun implementing the new apple planting methods they have learned from the project,” says Arthur Russell, Team Leader of the SARD III Project, “they have not only managed to rectify some deficiencies, which otherwise could have led to lower productivity and shorter productive lifespan of the trees, but last year were also able to offer to the domestic market the first locally produced red and green apples with better taste and quality compared to imported ones”.